Part 2 of this downtown adventure involves me taking Gillian on a tour of what downtown means to me. 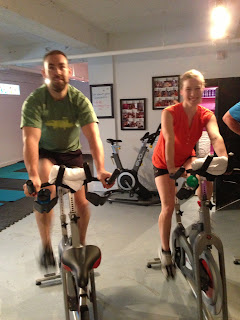 I'm usually wary of asking someone whom I don't really know that well to do something intensely physical. They may have a bad knee, or some other injury that you don't know about, or maybe they're just out of shape even thought they don't look it. So it was with some hesitance that I asked Gillian to join me for a class at the new spinning studio on Sackville Street: Cyclone Cycling (@CycloneCycling). 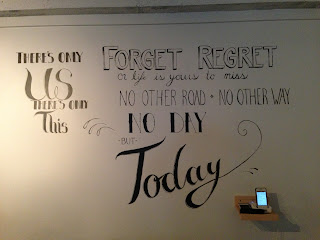 I have only been to a handful of spin classes before, but I'm no stranger to cycling. I'm a regular bike commuter, and my Big Day Downtown last year was all about cycling. The studio was 3 months old on Saturday when we had our class. Elana Liberman, the owner, took us on a conceptual cross-Canada ride, climbing up the Cape Breton Highlands and Rockies, and sprinting through the prairies. They also offer a combination spin/yoga class that may be compelling to some people. She definitely put us (and several other participants) through our paces as we crossed the virtual country. I invited her to try out of Julie's kettlebell classes for some payback :) 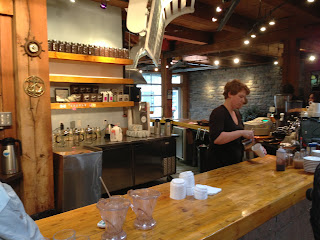 Our second stop was originally planned to be I <3 Bikes (@IHeartBikesHfx) on the waterfront, but the clouds were ominous and grey, and we didn't want to have to worry about getting the bikes back on time because the spin class ran a little long, and our schedule was tight as it was. We hoofed it to Historic Properties to get to Two if By Sea (@TwoIfBySeaCafe)before it closed. 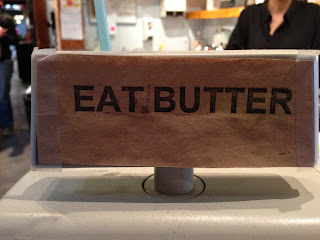 I got my usual black coffee and a muffin (unfortunately we were there so late in the day all of their croissants were gone), Julie got a latte, and Gillian got a chai something or other -- much fancier than anything I typically order :) Sitting down in a cafe setting was a nice change of pace from the sweaty spin class. We sat and talked and sipped on our beverages. I maintain that TIBS has the best brewed coffee in downtown Halifax, and if you haven't had one of their bigger-than-your-head-croissants or their cake-sized cookies, then you really owe it to yourself to try one. What better way to put those calories back on?

Down the boardwalk we walked all the way past the Seaport Farmers Market to Garrison Brewing. In retrospect, I wish we had made the stop at I <3 Bikes, because the rain ended up holding off and we could have saved time in the long run biking to Garrison instead of walking. Julie and I split a sampler tray, and Gillian got a Tall Ship Amber Ale. I'm partial to strong tasting beers, so I really enjoyed the Nut Brown and their various selections that are heavily hopped.

The beers went down very well, and this was a perfect way to end our Big Day Downtown as Gillian had to leave. Julie and I had to walk back to our car parked outside Cyclone, so we headed up that way. It was just starting to peck down rain.

Julie and I weren't planning to make a fourth stop, but Grayson was getting hungry, and she had fallen asleep on the walk to Garrison Brewing, so we didn't have the chance to feed her. We stopped in at the Mongolie Grill because it was about a block from where we had parked. 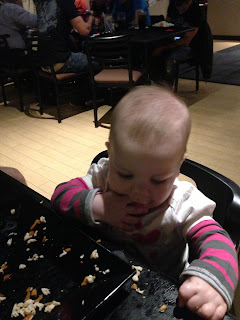 The prices for the meals at the Mongolie Grill are based off of the pre-cooked weight of all the ingredients that you pick out yourself from their buffet. Grayson was a pretty cheap date. I always enjoy eating there because you get to pick out exactly what goes into your meal, right down to the spices and sauces. I'm never disappointed. They have great service and I always get what I expect.

I hope everybody enjoyed peering into what I do downtown.
at 15:40