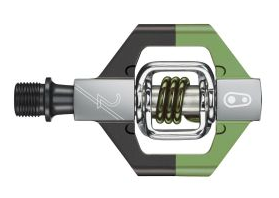 I was lucky enough to get asked again this year to take part in the Halifax Downtown Business Commission's Big Day Downtown promotion. The theme this year was to do something that you've never done before. I originally thought this would be a bit of a challenge for me, because I've worked in the downtown core for nearly 15 years and in that time, I've done a whole lot of things. It definitely took some thought before I decided what I would do.

Eventually, I settled on an idea that wasn't tied to a particular place or business. Ultimately, of course, I would have to spend my money somewhere, but what I chose was part of an activity I love to do downtown: ride my bike. I've been a bike commuter from Clayton Park to my office in the BMO building for the past two years. It's made me want to attempt things like bike touring or racing. I decided to use my Visa gift card to get some clipless pedals.

For those that aren't sure what makes pedals 'clipless', it means that there is a mechanism that binds your feet to the pedals via special cleats on the bottom of your shoes that doesn't use the over-the-toe baskets or toe-clips. Most cycling shoes are very narrow, and I have fairly wide feet, so I ended up getting a pair of Keen Springwater cycling shoes. the shoes and pedals together would have been over budget for my Big Day Downtown, so I'll just talk about the pedals :) 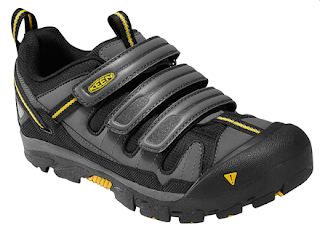 At Mountain Equipment Co-Op, Crankbrothers had a special edition version of their Candy 2 pedals (made especially for MEC) for about $15 less than the non-special edition version. The special edition is half black and half green (MEC's primary colour), but that is really the only difference. The silver version would have matched my bike better, but it seemed like a no-brainer for me to get the cheaper, greener, equivalent pedal. Since I bought them at MEC, their in-house bike shop was good enough to install them for me free of charge. It was a simple enough process, taking only about 10 minutes. I could have done it myself, but I don't own the specialized tool (a pedal wrench) required to remove my old pedals. The new ones are installed and removed with an 8mm allen wrench.

Part of what makes clipless pedals so appealing to me and cyclists everywhere is the simple fact that your feet are fixed to the pedals. This means that you are no longer limited to just pushing on the pedals, but you can pull on them as well, and once you get used to that, it can mean twice the power on every stroke and a smoother revolution; spinning, rather than a series of alternating pushes.

When I told people that I was trying out clipless pedals for the first time, everyone suggested that I practice clipping and unclipping several times before heading out on the road. I heard horror stories from cyclists who, forgetting to unclip when coming to a stop at an intersection, tipped over like they'd just taken off their training wheels. Then, hoping they didn't tip into traffic, they must swallow their pride and right themselves to keep going. I've never been one of those sensible people that do things like 'read instruction manuals', or 'practice unclipping', so as soon as the pedals were installed, I hopped on and took them for a test ride :) My inaugural ride with clipless pedals went from MEC on Granville St. to Sackville to Hollis to Marginal Road so I could visit the Seaport Farmers Market. I also picked up some of the fine wares from the Garrison Brewing Company since I was down that way.

To date, I have not yet forgotten to unclip from my pedals and I have not yet fallen unceremoniously on my side, however unclipping is not as simple a process as you might think. You can't just take your feet off the pedals, you have to turn your heels outward so that the angle that the cleat on your shoe makes with the pedals is such that they release. It can be awkward because due to the size and shape of my shoes, I can't do it when my foot is at the bottom of the pedal stroke; the crank gets in the way. I have had some close calls, but I have always managed to get my foot out in time. Here's hoping I never have to find out what happens if I can't.

A few days after having my new pedals installed, I found out there are going to be some changes going on to the streets in the downtown core; some streets are changing to one way, some are getting more parking, and some are getting bike lanes! I purposefully chose a cycling-related topic in order to draw some attention to cycling in Halifax and in retrospect, I can claim it was because of these new cycling-friendly changes coming to downtown.

After buying my pedals, I only had about $8. Who knew pedals could be so expensive? I treated my wife, Julie, and I to some coffee and confections at one of my favourite coffee places downtown, Just Us Coffee Roasters on Barrington Street. We enjoyed our coffees, muffin, and cookie as she walked me back to my office.

Thanks, Halifax Downtown Business Commission for allowing me to take part in this awesome promotion again. I had an awesome time trying out a new thing downtown!
at 14:36