This past weekend, I had the privilege of attending SappyFest for the third year running. I got to see bands ranging from Miracle Fortress to Old Man Luedecke, and of course, the venerable Eric's Trip, re-uniting once again to grace the crowds with their noise and melodies. Good times, great bands, and an awesome festival. How can you beat a festival that brings in a micro-brewer and sells beer for only $3? It's not even worth trying to smuggle it in at that price.

The photo is one I took while behind the stage in the main tent set up on Bridge Street in Sackville, New Brunswick. Check out the rest of my SappyFest photos on Flickr.

The only bad part of the entire weekend was on Sunday morning. I walked to my car in the morning (well, in reality it was more like the afternoon) to find that somebody had hit it while it was parked. My radiator had been punctured, its contents evacuated, and I wouldn't be able to drive the car home; I had it towed to a garage. I ended up getting a ride home with a friend and leaving my car in Sackville because I was unable to contact an insurance adjuster from TD Meloche Monnex. I thought they always had people on call for situations like this.
at 21:10 No comments:

May 1st is RSS Awareness Day

May 1st is RSS Awareness day. I feel it's my duty to share the love of RSS that I have with the rest of the world. Of course, many people that are reading my blog probably already know about RSS; maybe you're reading this via RSS right now! How exciting is that? But if you are reading this through RSS, you're in the extreme minority. According to some made-up statistics, 94% of internet users don't know about RSS, or just don't use it for some ungodly reason.

Here's a great video that can help you bring the joy of RSS to your RSS-impoverished friends, courtesy of the Common Craft Show.

I've finally decided to actually do some of the things that I have always talked about doing to my home. After all, I bought it nearly 10 years ago, and I have barely touched

it since then, save my theatre room in the basement. It was a hard decision to come by; it's definitely a lot of money, but I have to look at it as an investment in my home, rather than an expense; otherwise, I may never do it :)

Kent Building Supplies had a big sale this weekend; buy one can of paint, get one free, so Julie and I spent last night picking out colours. This was perhaps a bit hasty and a bit ambitious, but I think it's going to work out well. We hit the store as early as we could this morning, and I had a chat with one of the "designers" in the paint department. A new colour was picked for the upstairs bathroom, but for the most part, she thought the choices were pretty good.

Coming home with 11 cans of paint, 18 packages of bamboo flooring, a new fibreglass step-ladder, and a bunch of other

crap in the back of my Element was pretty interesting. When the flooring was being loaded in, I wasn't sure if it could handle it all. The boxes of flooring were just barely too long for the tailgate to be closed, but everything remained intact during the drive. Unloading all those boxes was way more fun :) 18 boxes, about 40 or 50 pounds each -- you do the math. Not to mention that they're long and skinny, and hard to get around tight corners such as those on the way into my basement from my front door.

The flooring is going to wait until we finish painting, which I think just makes good sense, but I can't wait to get it down. I am sick of the carpet that's down right now. I'm sick of carpet in general. You can't keep it clean, it gets stained, it looks like crap. It sucks. Carpet sucks. I've seen hardwood floors change the entire look of a place. That and with new paint I could have a whole new home.

Arm rests in movie theatres can be put up 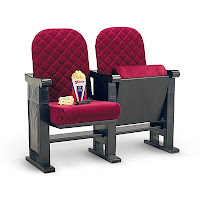 I tend to rarely hit the theatre anymore now that I have one in my home, but when I do, I like to try and be as comfortable as I am on my couch at home. Unfortunately, that's not always possible: The arms on the chairs are awkwardly placed, the seats in front of you are too close to sensibly position your legs (well, if you're tall like me anyway), not to mention the other people around you who can annoy the crap out of you.

This is basically a public service announcement to everyone out there who regularly goes to the theatre to see a movie. I just learned that in some theatres, you can put the arms up. They fit back in the slots between the seats and end up flush with the backs. I thought this was the best development in movies at the theatre since I invented throwing Skittles at people in the dark.

Next time you go to the movies, try to put up the arms. My girlfriend and I were lounging on a 6-seat-wide section of seats, right in the middle of the theatre while we watched National Treature 2 last night. It was fantastic. Sometimes you just can't beat a big, big, big screen.
at 11:39 1 comment:

If you were like me, rather than listen to your own (stolen) music, or subscribe to some satellite radio service, you'd head over to pandora.com and set up a station of your favourite music and rock out like you were excreting boulders. That happy fantasy came to an end in 2007 when they were force to limit their streaming to only American IP addresses.

I'm happy to report that GlobalPandora.com is back (at least for Canadian IPs), as good or better than ever, and even works with your old Pandora.com accounts! Looks like the box is open again.

I type 89 words per minute