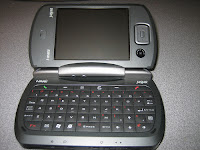 I am selling my iMate Jasjar. It does a whole lot of stuff; probably more stuff than I need. Because it does so much stuff, it's a little large for a guy who just wants a cell phone most of the time. I ended up buying a Motorola SLVR a few months back, so the Jasjar has been sitting idle. It's still in great condition (a few superficial dings, but working flawlessly).

Yeah, how long have you had it?

I had it for about a year...but it's long since gone. I sold it shortly after I posted that.