MySpace is a scourge (to tabbed browsing)

The worst thing about MySpace isn't the ugliness of the site. It isn't the fact that it's horribly slow. For anybody who uses tabbed browsing regularly, it's got to be the music player that starts playing as soon as the page loads.

I can appreciate the use of MySpace for discovering bands that I haven't heard before, but I often want to click on somebody's friends and open them up in new tabs for me to peruse at my leisure. If any of them have music players, they will all start playing. <sarcasm>And nothing sounds as awesome as 4 completely different songs playing at once.</sarcasm>

Why can't the song play after I click play? I don't have a "music" myspace account, but if this is a setting, I'm going to start cursing every band who doesn't turn it off. 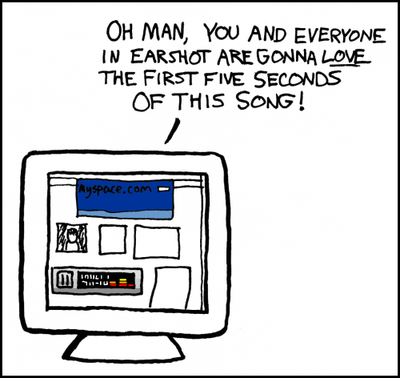 Image courtesy of xkcd, a webcomic of romance, sarcasm, math, and language.

Also, does it piss anyone else off that the retarded graphical madness that goes on in myspace's music player has absolutely nothing to do with the shit that's playing? They look like VU meters, but they correspond in no way to the actual output levels.
at 08:15